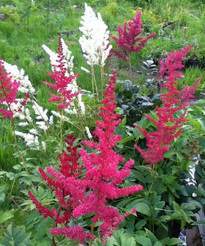 ﻿﻿ASTILBES﻿ ﻿–   Astilbes are great additions to part shade gardens. The bloom time for Astilbes is June into August depending on variety. Early, mid and late refers a variety's bloom time during this period. They do best in part shade do great in sunny areas if they are not allowed to dry out. Astilbes do fine in shade but you have better flowering if given some sun. Attracts both bees and butterflies. Sun to shade. Deer resistant. Nice cut flowers. Z 4-8 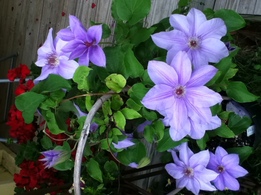 CLEMATIS – Sun to part shade. Deer resistant. Zones 4-8. These are great climbing vines, however sometimes it can be a bit intimidating when trying to decide when to prune.  Here are a few basic guidelines from Walter's Gardens Inc.

Early Flowering Varieties - bloom on last years growth. They usually never need to be pruned. However, if you feel pruning is necessary, prune within a month of flowering. You may also prune back old woody growth at this time (down to 1’-2’) but it may take a year or two for it to start flowering again.

Mid-season and Re-blooming Varieties – These bloom on previous and current season’s growth. Prune in late winter or very early spring. Remove dead areas. Cut back the remaining shoots to 6”-9” about some ‘well-developed buds’.

Late season Varieties – Bloom on new growth. Prune in late winter or early spring. These varieties can be difficult to prune but an easier way to accomplish this is pruning back 1/3 of the plant each year for 3 years, cutting the shoots  back 6”-9” above some well-developed buds.

Clematis also like to have their roots kept ‘cool’. This can be accomplished by placing stones or planting a few plants (daylilies are a great solution) around the base of the plant. But the most practical way is to simply not let the root system get dry and keep them well watered (but not standing water please). 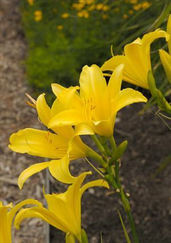 Photo courtesy of Walters Gardens, Inc.
HEMEROCALLIS (Daylilies) –Nice cut  flowers. Attract hummingbirds and butterflies. Except for the fact that deer love them daylilies are almost the perfect perennial. They are not fussy about soil and are tough as nails. I plant them along the road edge for this reason. And you  could  not ask for a wider range of colors , heights and bloom times (mid-June until   mid-August). Zones 3-9. Sun to part shade.

Note on re-blooming Daylilies – There are many varieties of daylilies that are considered ‘Re-bloomers’. However, in Maine this is determined by the length   of our growing season. Some years (2010 for example when spring actually occurred in the spring) you may get significant re-blooming but many times you may not have much re-blooming simply because the growing season had a late start and an early end in the fall.
To encourage re-blooming, remove spent flower stalks and fertilize. 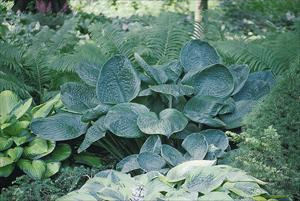 Photo courtesy of Walters Gardens Inc.
HOSTA –
I will sometimes have customers literally groan when they ask for a good shade plant and I mention Hosta. But they ARE a great shade plant and provide a perfect backbone to any shade planting. They come in an almost unlimited variety of sizes, are not fussy about soils and require very little care. Both the leaves and flowers make nice cut flowers. Larger varieties will take a few years to get to size. ‘August Moon’ will take more sun than other varieties and in fact a bit more sun will enhance the chartreuse coloring. Blue varieties generally do not do well when exposed to sun and may burn.
A very loose general rule when dealing with slugs is this: Thick, heavy leaves will show greater slug resistance than leaves that have a thin substance. Note I did   not say ‘slug proof'. When a slug wants to chew it will try anything. However, they are opportunistic and will go for what is easiest on their mouth parts first. Shade to part shade.  Zones 3-9. 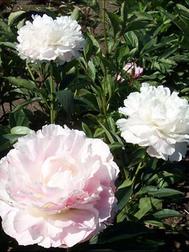 Photo courtesy of Walters Gardens, Inc.
PAEONIA (Peony) – Peonies are a classic for any sun to part shade perennial planting. They are not overly fussy about soil but it should be well-drained and   be careful about adding fertilizers with too much nitrogen. Once established  they are incredibly long lived but they will need staking. Even though peonies will do fine in a part shade location I find I get the best flowering with full sun. Because of their shrub-like appearance and because they die-back in the fall I often recommend them for plantings along the  sunny side of the house.  Sun to part shade. Zones 3-8.
A newly planted peony may take a couple if years before it flowers. However, here are a few more reasons that a peony may not be flowering:
1. Planted too deep.
2. May not be getting enough sunlight.
3. Make sure not to cut plants back until the foliage has turned brown.
4. Plants have been moved too often and have not been allowed to get established.
5. Plant is still too young to produce buds. Give it a couple of years to get established.